The wedding service in the Greek Orthodox religion is an ancient and beautiful. It has been celebrated in its current form for centuries. Full of symbolism, the ceremony is great experience if you have never attended one before, and is likely to be quite different from other weddings you have attended. In the Greek Orthodox ceremony, the bride and groom do not make vows to each other: instead, their vows are made to God.

If you or your partner are baptised Greek Orthodox, can help you with all aspects of your orthodox ceremony in one of our beautiful Kefalonian Greek chapels.

The wedding ceremony is in 2 parts - the Service of Betrothal and the Ceremony of the Sacrament of Marriage. The exchanging of rings is the focus of the Service of Betrothal. The priest blesses the rings by holding them in his right hand, and making the sign of the cross over the heads of the bride and the groom. The rings are then placed on the third fingers of their right hands. The "Koumbaro", the couple's best man, then swaps the rings over between the bride and groom's fingers three times. Number three symbolizes the Holy Trinity.
Ceremony of the Sacrament of Marriage
This Ceremony consists of several key parts: first several prayers are said, and then the priest joins the hands of the bride & groom. This symbolizes the couple's union.

The bride and groom are crowned with head wreaths, or "stefana", which are joined by a white ribbon and have been blessed by the priest. The crowns symbolize the glory and honour that is being bestowed on them by God, and the ribbon symbolizes their unity. The "Koumbaro" then exchanges the crowns between the heads of the couple, again three times.

The crowning is followed by a reading of the Gospel, which tells of the marriage of Cana at Galilee. It was at this wedding that Jesus performed his first miracle, changing water into wine, which was then given to the married couple. The bride and groom drink from the couple three times. It is their cup of life, and symbolic of the fact that from this day on they will share all life's experiences together. 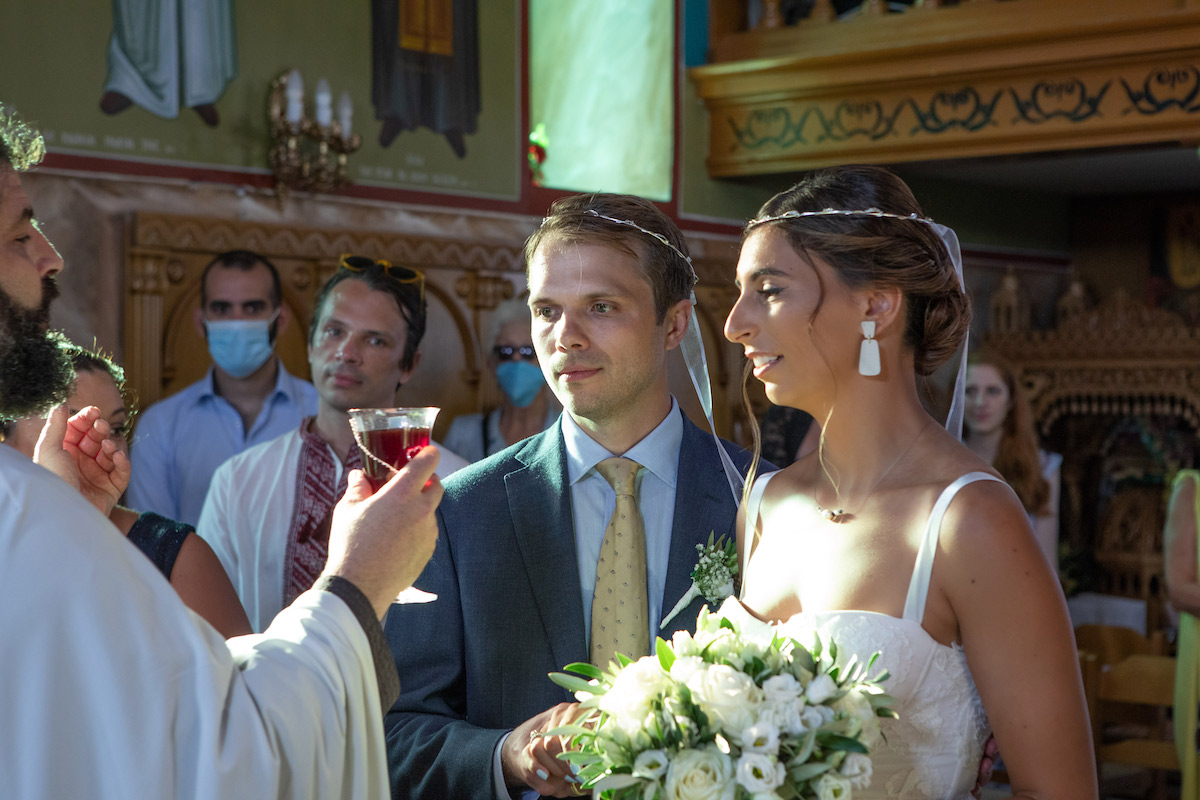 The priest then leads the couple, who are still wearing their head wreaths, 3 times around the altar making their first steps as a married couple. The "Koumbaro" follows close behind the couple holding the wreaths in place.
The Removal of the Crowns
When the Ceremonial Walk has ended, the priest blesses the couple and the crowns are removed. He then separates their joined hands with the Bible, reminding them that only God can break the union which they have entered into.